Paper cut Ketubah – The historical role of the Ketubah 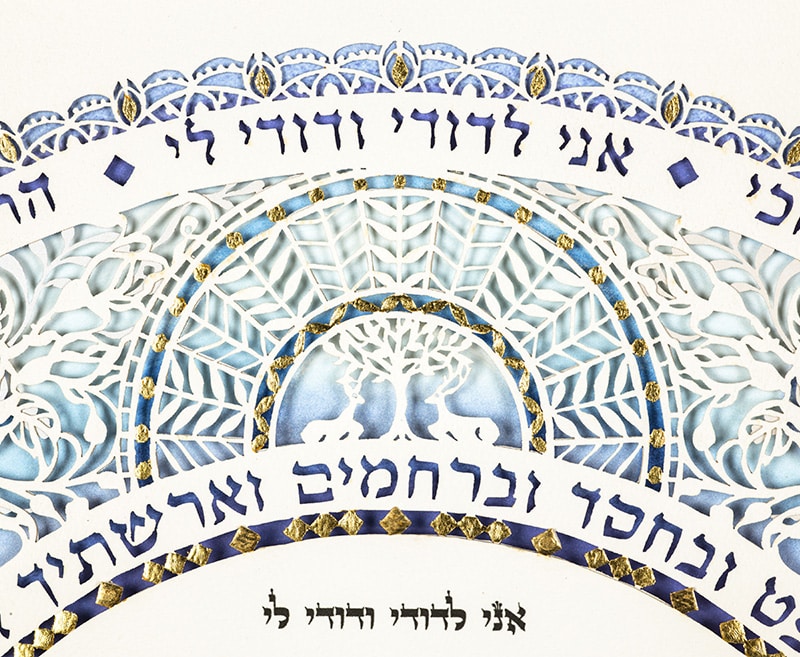 Historically, the ketubah was a document that specified the obligations of the groom, and, even more importantly, served as a safeguard for the wife, by listing provisional recompense in the case that she be abandoned, divorced or widowed.

The first reference to a legal deed associated with the Jewish wedding ceremony is found in the apocryphal book of Tobit 7:14 from the third or fourth century BCE, “And he called Edna his wife, and took paper and wrote an instrument of covenants and sealed it”.

THE TRADITION OF ILLUMINATING KETUBAHS

The first illuminated ketubahs date from as early as the tenth to twelfth century and originated from Israel and Egypt. However, the earliest example of a paper cut ketubah dates from 19th century Italy.

The designs used to adorn the ketubot are as wide and varied as the regions from which they originated: Central and Eastern Europe, Russia and throughout the Ottoman Empire. The motifs, in turn, are influenced by the cultures of their origins. One prevalent motif is the endless knot, symbolizing the eternal love of the bride and groom. Others refer to biblical themes, such as “the gates of Jerusalem,” the “menorah,” and a variety of flora and fauna mentioned in the scriptures. There are also nods to the ancient classical cultures: zodiac signs, urns and ornaments and arches and other architectural features.

The careful attention and elaborate ornamentation given to this legal document, attest to the significance Judaism places on the marriage covenant –central to the life cycle sequence. It is a manifestation of the concept of hiddur mitzvot, beautifying and enhancing the ritual and deeds.

While the decorative ketubah has had a longstanding place in Judaica, the paper cut ketubah is historically more rare and special.

In the past two decades the paper cut, as a form of Judaica, has seen a renaissance. This is partially credited to the laser process, which has enabled artists to develop more intricate and sophisticated designs that are accessible to to a wider public. Today, paper cut ketubot have found a place in many Jewish homes as cherished family heirlooms.

Previous Traditional Ketubahs and Modern Ketubahs – What Has Changed?
Next My Parents’ Ketubah