Choosing your ketubah is a wonderful journey of self -exploration and defining yourselves as a couple. I kid you not! Read on. I shall make my case.

Although, at one point it may have seemed like a small endeavor in comparison to the many decisions that you have had to make (setting a day, month, year, picking a venue, dress, photographer, …) in the planning of your wedding ceremony and celebration. Now, purchasing a ketubah online might possibly seem to you like Mission Impossible.

A note of positivity.  Many couples report that choosing their text was actually a wonderful experience. It took them by surprise to discover that selecting their text gave them the opportunity to sit back, reflect and talk about what they envisioned and anticipated would be the fruits of their union.  It became a contemplative moment in the midst of the frantic activity of planning the event to imagine just what their future lives together could look like and to be aware of being mindful of their partner’s individuality, what she/he brings to the partnership, as well as, their mutuality and congruities.

The first thing to know about the ketubah text is that it is a legal Jewish marriage contract and therefore, it reads like a legal document.  It begins with establishing the day, month, year and city/location of when/ where the wedding takes place in the very first sentence. It records the exact names of the couple. In its original form, the concept of a ketubah was for the groom to very publicly agree to a list of duties and obligations to his future spouse in a written document, signed by two witnesses. Contrary to what is commonly believed, a dowry was not an essential part of the agreement. Rather, a particular mention was made of an agreed-upon sum of money to be awarded to the wife on the untimely occasion of her widowhood or divorce. It served as a protection for women who lived in a time, where they were, for the most part, financially dependent and with little societal resources. It was signed only by two Sabbath-observing males (not the groom, nor the bride, nor the rabbi!) who were not family relations of the groom and which made it legal and binding.

The Orthodox ketubah text is, in both word and meaning, very much as it once was centuries ago.  Today there is a standardized text approved by the Rabbinical Council of America (RCA) which includes the Hebrew date as well as the date according to the Gregorian calendar.  Even though it is pretty much accepted, there may be words or even a particular spelling of words (or names) that your rabbi considers to be necessary.  No worries; we can accommodate these requests and modifications.

Today, many Orthodox officiants are happy and willing to give their consent to, in an addition to the Aramaic text, an English codicil – a declaration: of love, companionship, mutual respect and honor and of the spiritual and other aspirations of the couple. So, definitely have a talk with your rabbi to come to an understanding what you and she/he require.

The Conservative text is also a traditional Aramaic text and will -most often include- the “Lieberman clause”.  This is embedded in the Aramaic and its aim is to prevent the proliferation of agunot (women who have not been granted a get- a divorce in the Beit Din, the rabbinical court, according to the Jewish Law).  Most Conservative clergy will request this; but once again, speak with your rabbi about the specifics of the text. We offer the Aramaic text with several different options for an English addendum: those that articulate the wishes of loving friends and life partners: of the promise of their humanistic, spiritual and egalitarian intentions and the support that they offer one another.

Reform texts can range from the more customary (albeit, egalitarian!) to a more contemporary and deeply personal phrasing. The ketubah is written in Hebrew with a translation to English –or any other language, for that matter.  If you are having a Reform ceremony, you will have a whole lot more leeway in choosing your text. Still, have we not said this before?  Speak to your officiant, because a ketubah text surprise (!) is the last thing you want when you are standing under the chuppah.

Additionally, we offer many other ketubah texts suitable for Sephardic, Modern-Egalitarian, Human Secular, Interfaith, Same-sex and Anniversary ceremonies. We think you will find a text, here, that will suit you perfectly. Can’t find one that’s just right for you?  Need a custom text?  Let us know.

Any questions at all, just contact us and we will be happy to help.

A traditional Conservative text with the Lieberman clause and a brief English addendum. Aramaic and English.
Example

The Conservative Aramaic text with the Lieberman clause. The English addendum is a text that embodies the fervent reverence of the couple for one another and their vision of their…
Example

The Conservative Aramaic text with the Lieberman clause. The English addendum is written with clarity and vivid imagery of growth and discovery. Aramaic and English
Example

The Conservative Aramaic text with an English translation.  The Lieberman clause is included in the Aramaic text.
Example 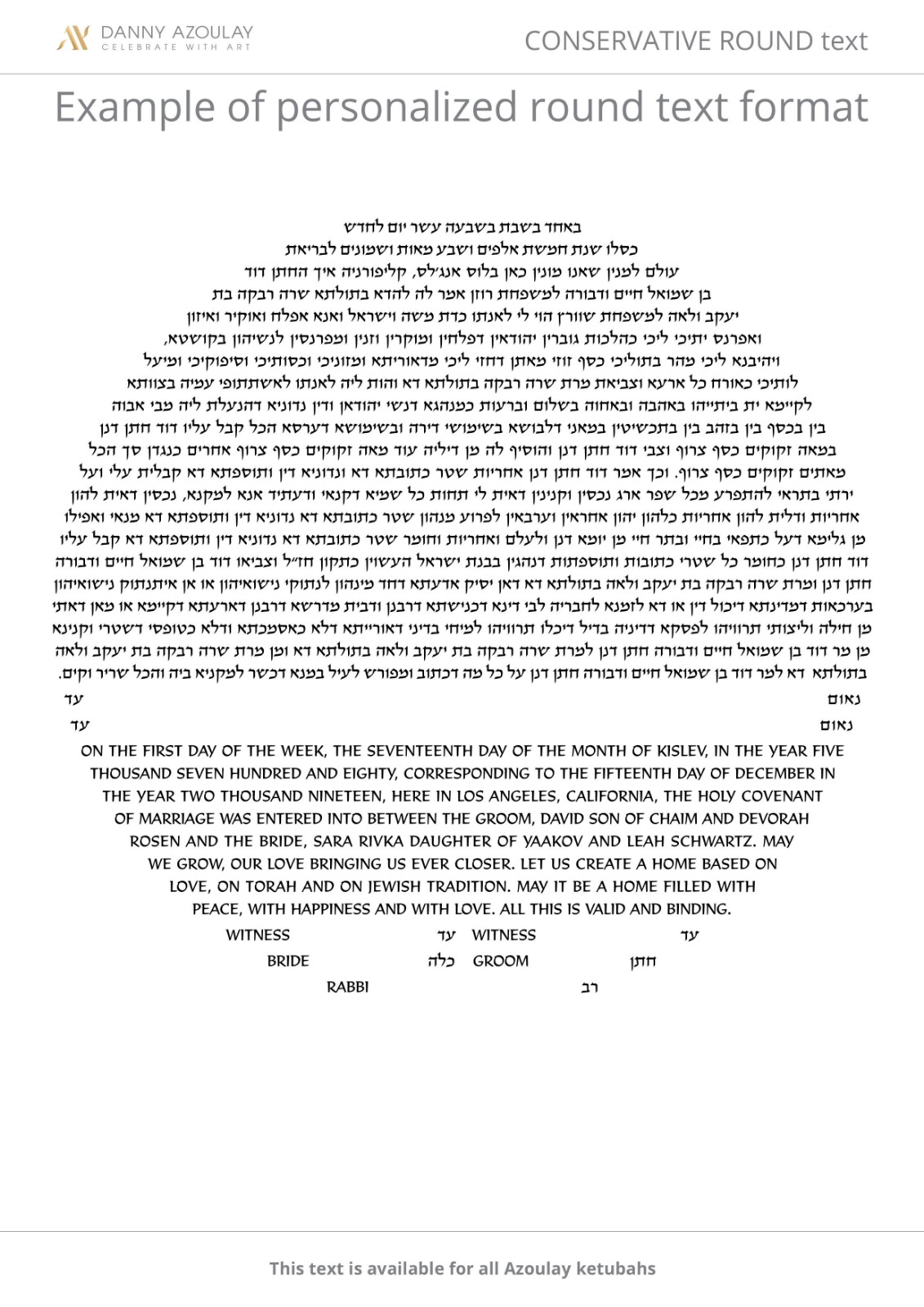 The Orthodox texts we offer include that of the Rabbinical Council of America (RCA), the United Synagogue of London and the Chabad–all in Aramaic only. Some American Orthodox rabbis may be willing to accept the RCA with a codicil in English. We highly recommend that you check the text with your officiating rabbi.

The standard Orthodox text by the Rabbinical Council of America (RCA). Aramaic only.
Example

The standard RCA Aramaic text with an English codicil, which expresses the love, commitment, and partnership of the bride and groom.  Please consult with you rabbi.
Example

The standard RCA Aramaic text with an English translation. Please consult with your rabbi.
Example

An Aramaic-only text accepted by the Chabad Organization. Please consult with your (Chabad) rabbi.
Example

The Aramaic-only text accepted by the United Synagogue of London. Please consult with your rabbi.
Example 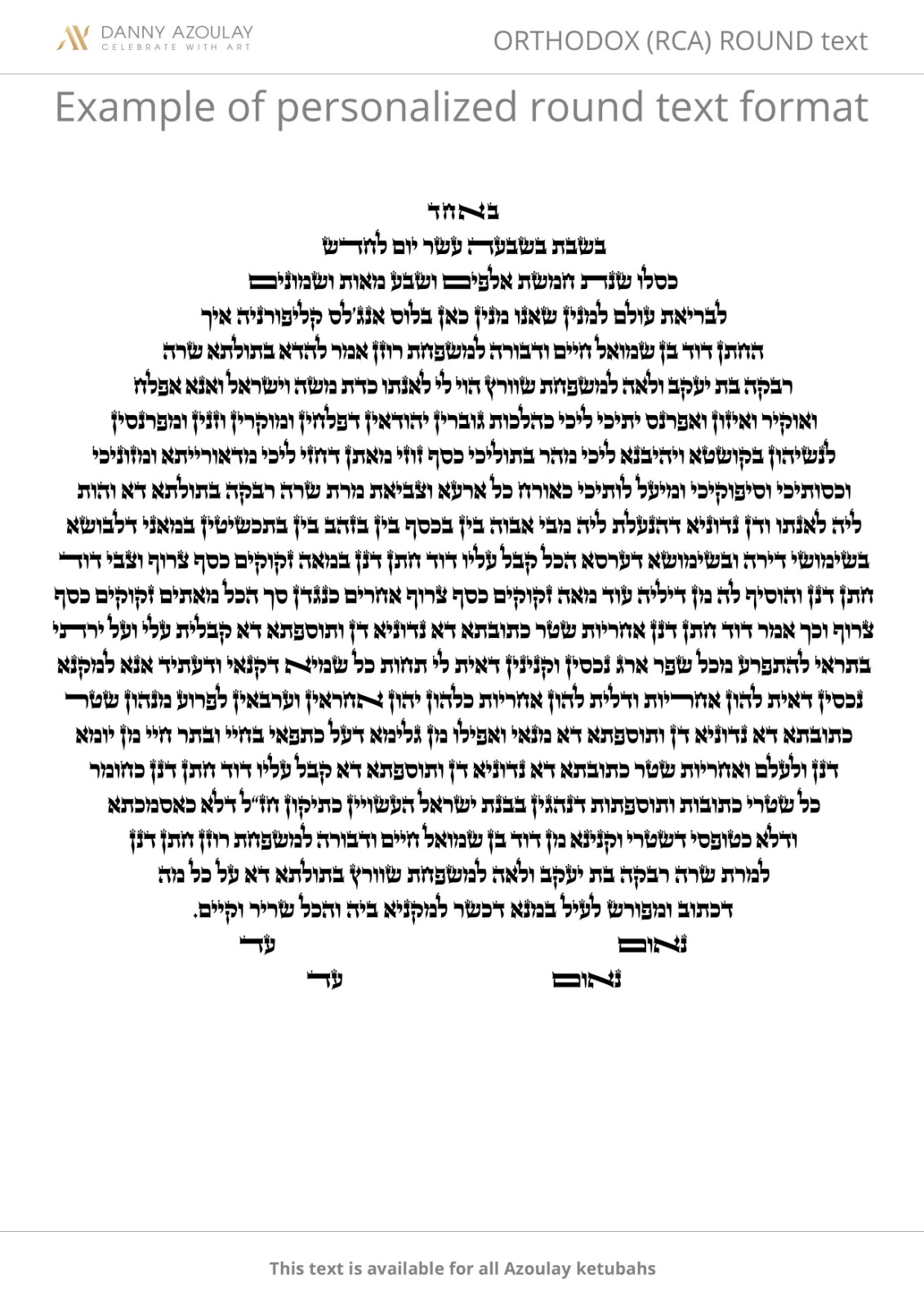 We offer a selection of Reform texts in Hebrew with a translation to English. Jewish heritage and faith are usually prominent with an emphasis on a mutual and equal commitment.

The words of this traditional Reform text possess the beauty of clarity and straightforwardness. Hebrew and English.
Example

“Set me as a seal on your heart” (Song of Songs 8:6) A text that embodies a sincere expression of love, companionship and Jewish values.  Hebrew and English
Example

“…No look more beautiful than the look of love” This text is honest and ingenuous in its expression of the wedding vows. Hebrew and English
Example 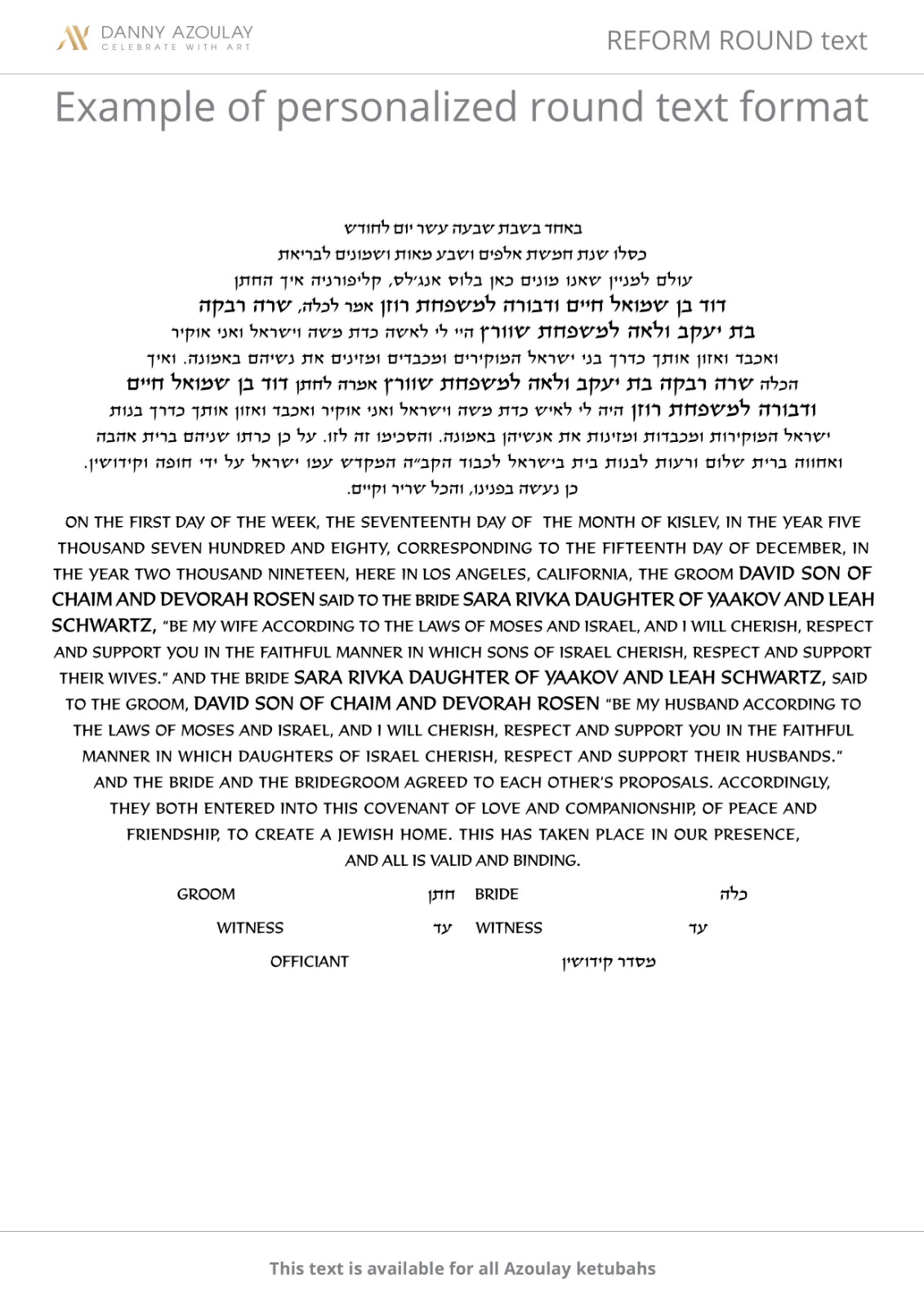 The Sephardic texts are traditional texts and may be varied in wording. Therefore, we suggest that you consult with the officiating rabbi. If your rabbi requires a text, other than what you see on our website, contact us (we have more Sephardic text options).

A Sephardic text used in the US. Aramaic only  Please consult with your rabbi.
Example 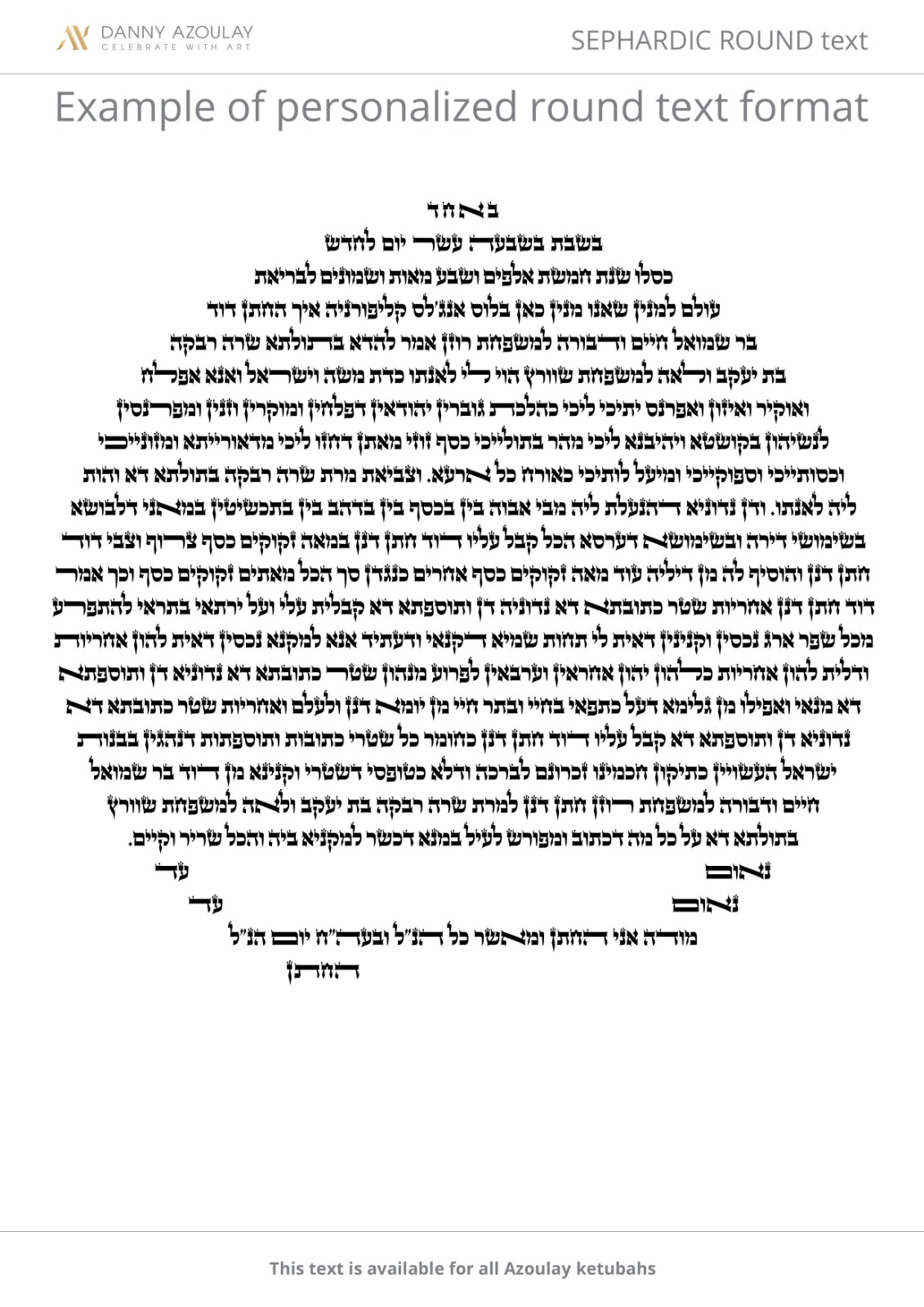 We offer a wide range of Modern texts. The texts are in Hebrew of which the English text is identical in spirit but not literal translation. The emphasis of these texts, is one of a marriage built on the principles of an equal and mutual commitment. Can be ordered in Hebrew only or English only. These texts may also be used for interfaith marriages, as well.

The heartfelt words describe a road map for marriage. Suitable for Intermarriage. Hebrew and English
Example

This text is rich in imagery and straightforward in intention.  Suitable for Intermarriage and Same sex weddings. Hebrew and English
Example

Rabbi Kelman’s traditional and egalitarian text.Similar to the Conservative text without the Lieberman clause Aramaic and English
Example 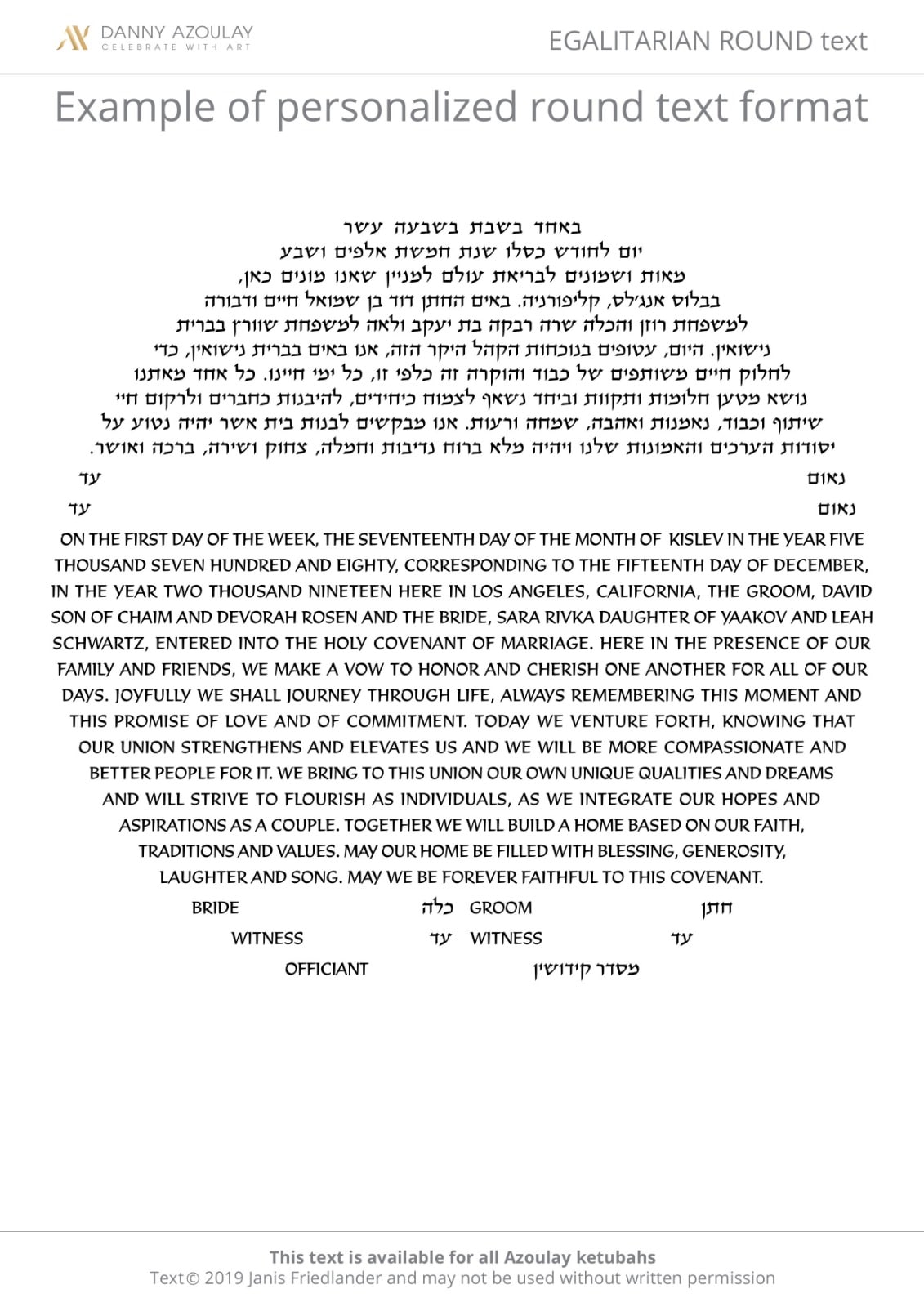 The emphasis of this text is a recognition and mutual respect for diversity in faith and heritages and the willingness to create a home which honors both partner’s beliefs and customs. The English text is a translation of the Hebrew.

Set me as a seal on your heart (Song of Songs 8:6)A text that is suited for couples coming from diverse faiths and backgrounds, embracing their differences and that which…
Example

With a heartfelt sincerity, this text refers to the melding of the interfaith couple’s backgrounds and the betterment of their lives as its result. Hebrew and English
Example 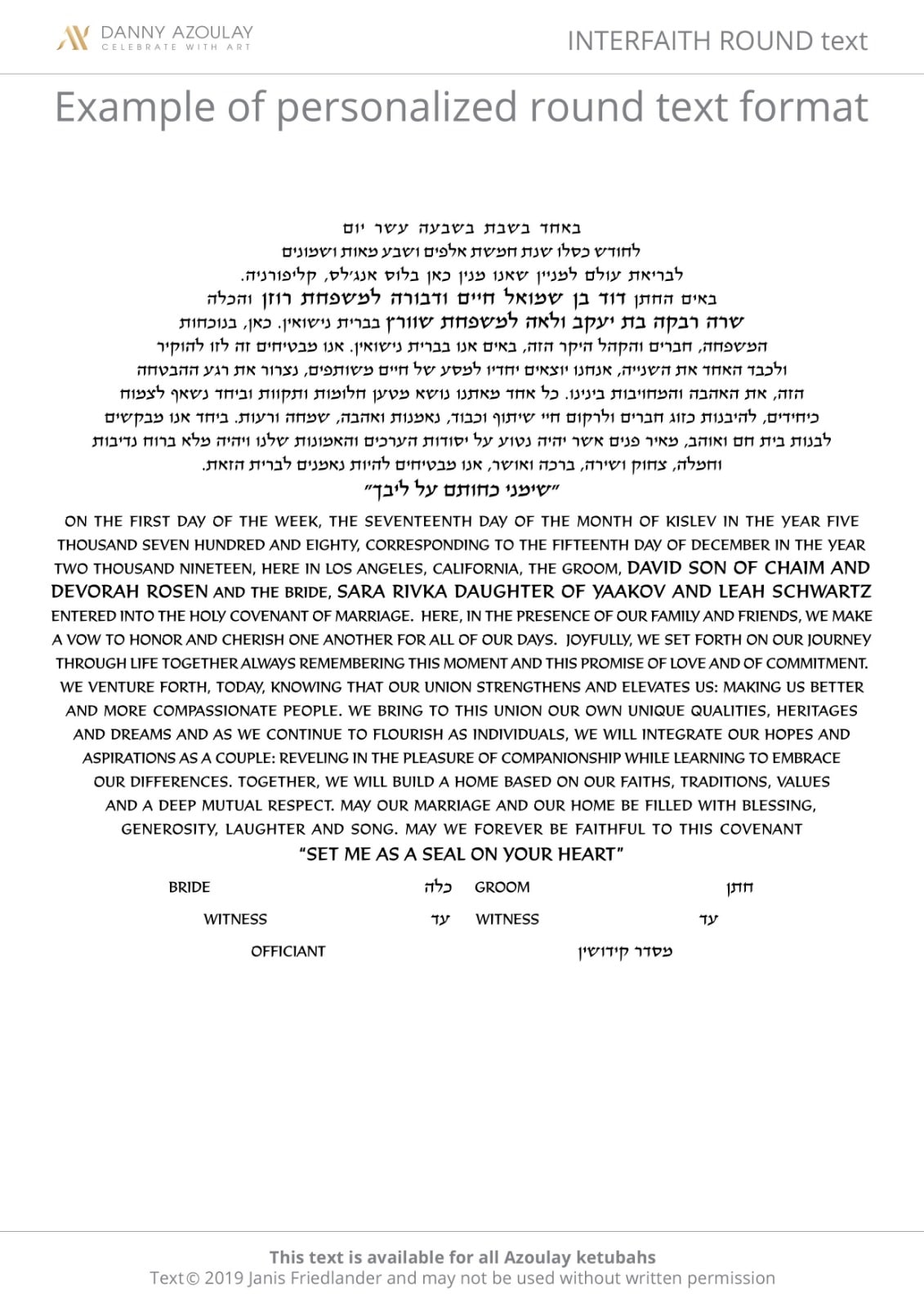 We offer two versions of the Secular Humanist texts, approved by the Association of Humanistic Rabbis and the Leadership Conference of Secular and Humanistic Jews, in Hebrew with a translation to English.

A text by the Association of Humanistic Rabbis and the Leadership Conference of Secular and Humanistic Jews. The text is appropriate for Same-sex and Intermarriage ceremonies. Hebrew and English
Example

A text celebrating the Secular Jewish home by the Association of Humanistic Rabbis and the Leadership Conference of Secular and Humanistic Jews. Also suitable for Same-sex. Hebrew and English
Example 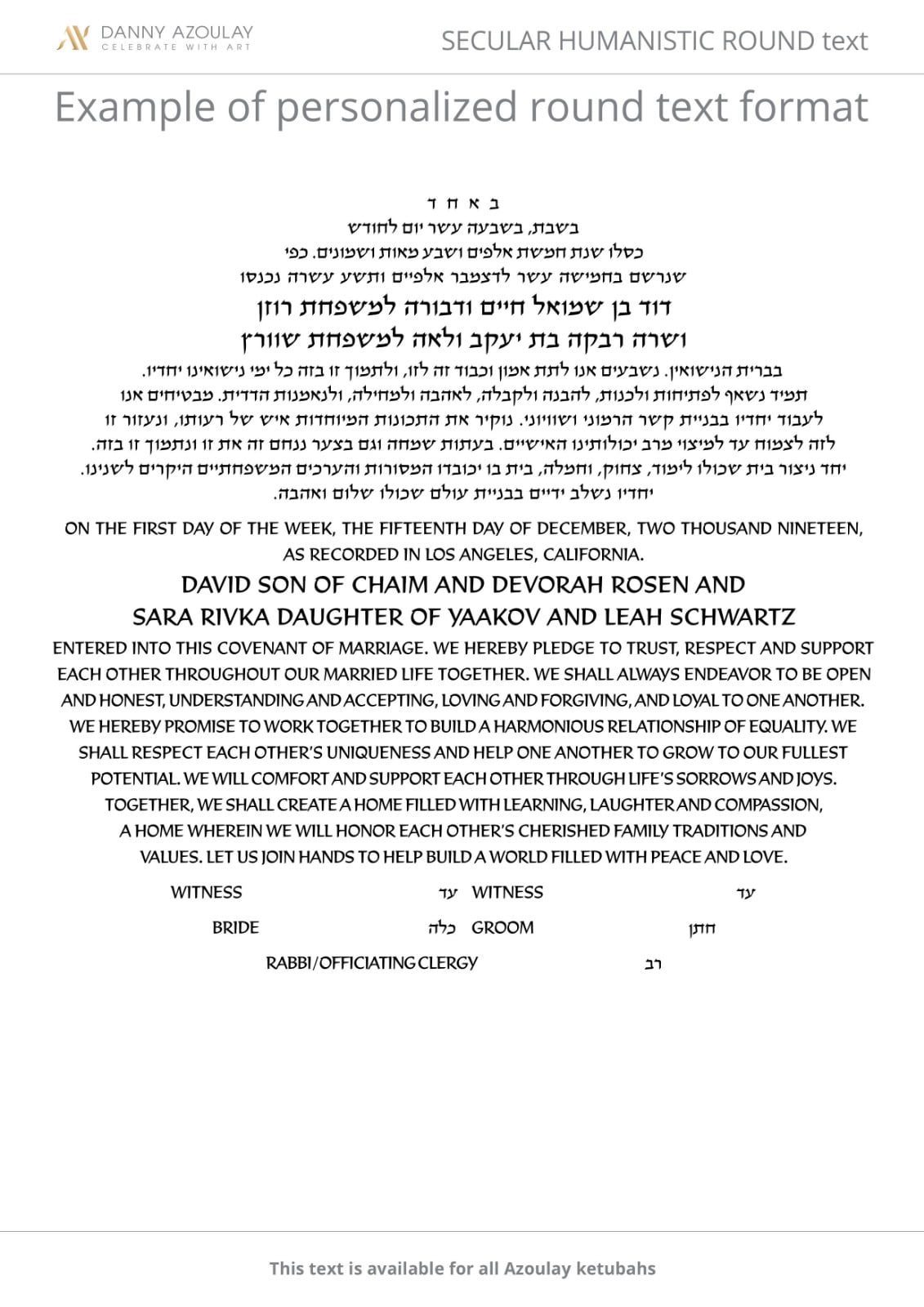 A ketubah text written in same-gender language appropriate for same-sex marriages. The Hebrew and English texts are identical is spirit (but not literal translations) and may be ordered in English only, or, Hebrew only. Some of the Egalitarian and Secular humanist texts we offer are gender-neutral and may be appropriate, as well.

A beautiful text that describes the partnership of marriage as a union that encourages and supports each individual to flourish. Hebrew and English
Example

A beautiful text that describes the partnership of marriage as a union that encourages and supports each individual to flourish. Hebrew and English
Example

The emphasis of these texts is the desire and willingness of the couple to grow and encourage spiritual growth in each other and their surroundings. There are references to ritual and heritage, rather than to Judaism.

Set me as a seal on your heart (Song of Songs 8:6) A heartfelt view of marriage that is centered upon spiritual growth.  Also appropriate for intermarriage couples. Hebrew and…
Example

Rabbi Devon Lerner’s beautiful text describes the building of a home open to the spiritual potential in all life.Also appropriate for Same-sex and Interfaith. English
Example 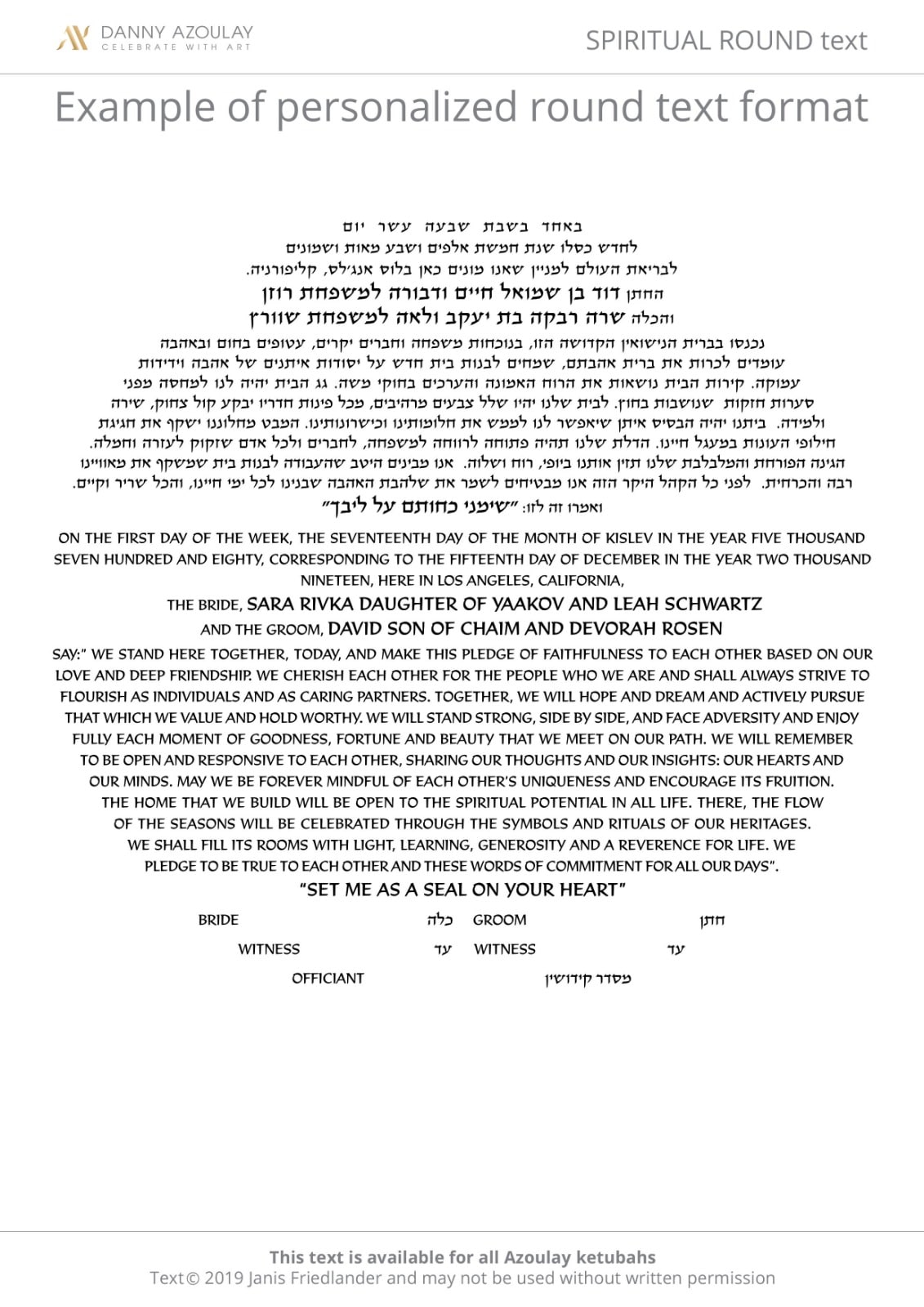 These texts are suited for couples who are celebrating a milestone in their marriages or renewing their vows. In Hebrew with an English translation or may be ordered in Hebrew only, or English only. Alternatively, you can send us your own text.

Set me as a seal on your heart. (Song of Songs 8:6) Gratitude is expressed for the years spent together and an anticipation for the years going forward. Suitable for…
Example

A text that reflects on the wonderful years of marriage based on the Jewish faith and traditions and for the hope for full and happy future years. Hebrew and English
Example 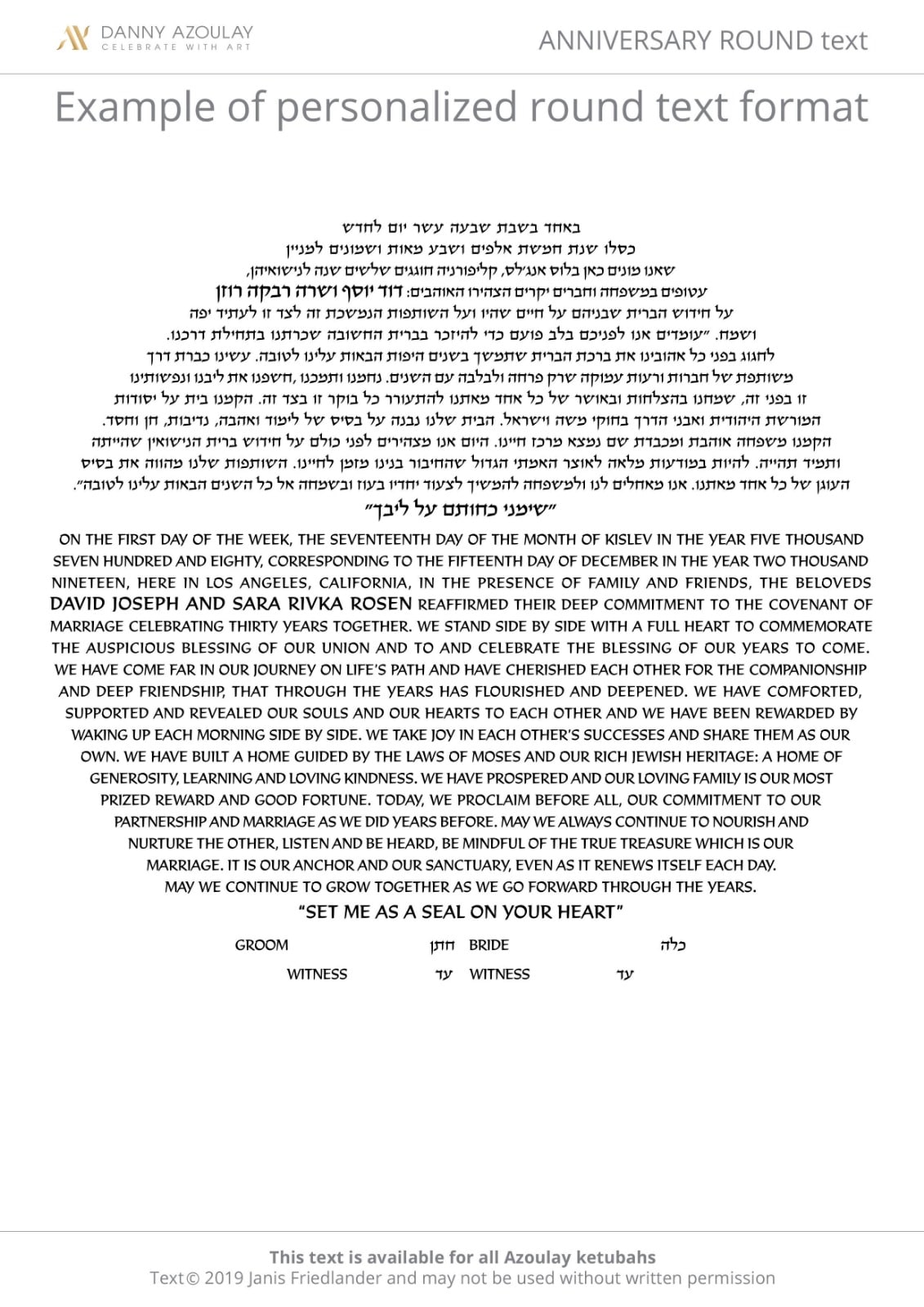 Write your own text

Write your own text

If you need a specific text or have written your own commitment vows, please contact us. We will be happy to accommodate our client’s request (there may be an additional…
Example 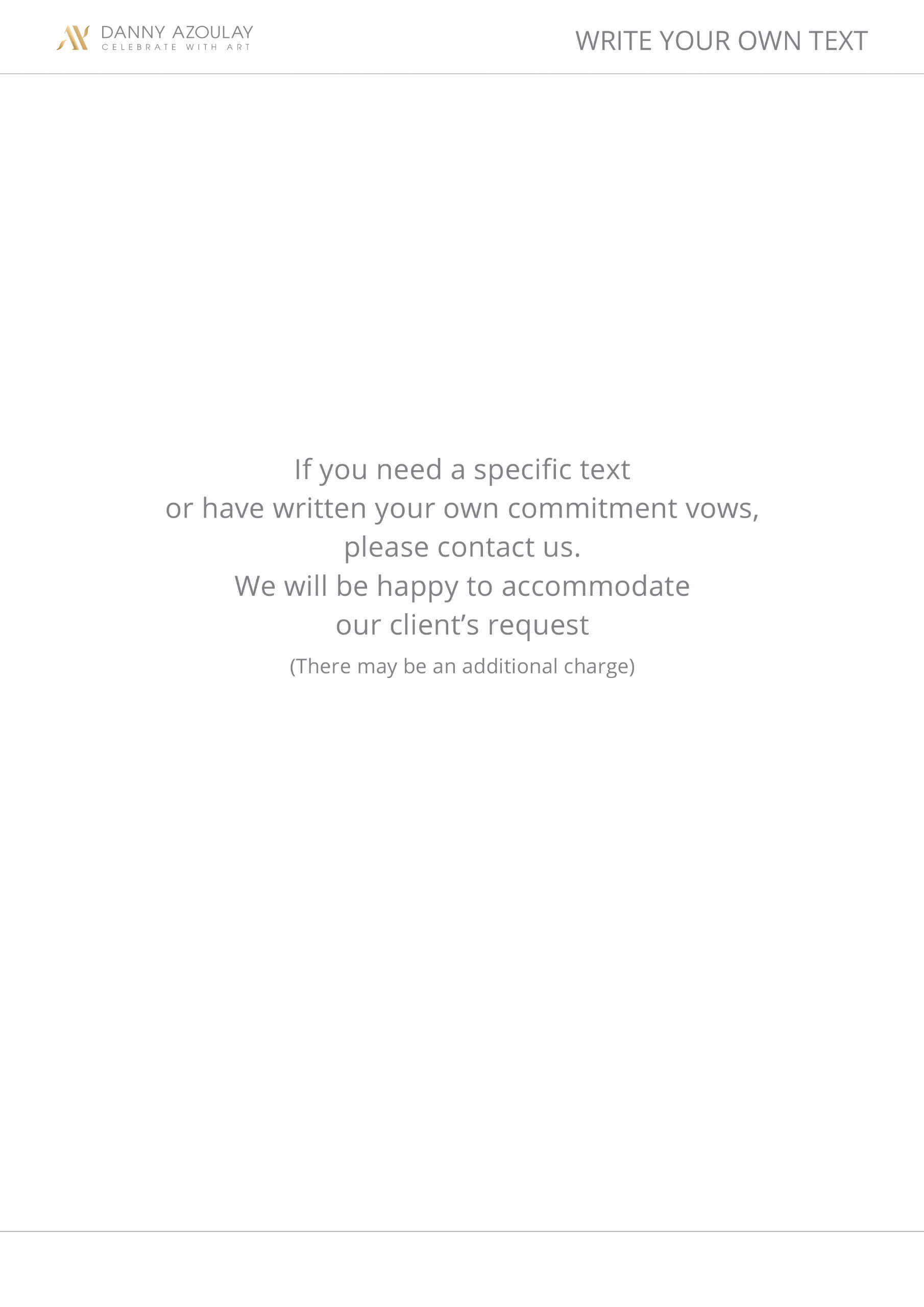