Shop all Ketubahs
Popular Ketubahs
Ketubah art is an art like no other. It is exciting to create; it is exciting to purchase and the very best of ketubah artwork will continue to engage its viewers for years on end. Danny Azoulay ketubahs do all of the above.

Just talk to Danny about his inspiration, work process– or even about making a ketubah sale and you can see and hear the enthusiasm and the deep satisfaction he gets from making beautiful ketubahs. “Azoulay Art began years ago, after I finished studying at Bezalel (Art Academy). I made hand painted ceramic Judaica for years; I love working in 3-dimensional design. The challenges of bringing shape, function, color and ornamentation considerations together to create meaningful Jewish ritual art is tremendously rewarding for an artist. But, when I began to discover the artistic possibilities of making ketubot and the challenges involved in creating modern ketubah art—one that can combine traditional ketubah themes and symbols with new techniques and the visual alphabet of modern designs, I was hooked and happy.”

Happiness has a lot to do with ketubah art in general, and in Danny Azoulay art, in particular. A traditional ketubah is a Jewish marriage contract, but the fact that, in Jewish communities, marriage is considered the very most auspicious of life cycle events, the beautification of this legal document has become paramount to its very essence.

The ketubah artwork selected by the bride and the groom is surely an expression of who the couple are. In some intangible and visual way, the design has the ability to touch, not only, the couple’s aesthetic sensibilities, but their values, their cultural histories, childhood memories as well as their dreams and aspirations. And, of course, ketubot are a lasting reminder commemorating the joy of their wedding day.

Danny offers a wide range of artistic styles in his Jewish wedding ketubahs, placing an emphasis on fusion. He weaves diverse motifs of decorative, traditional Jewish and symbolic significance together with a cerebral and incandescent intelligence. The result has the effect of evoking a nostalgia for the past, originality and renewal and a vigorous nod to the future. Danny’s artistic process is one of constant discovery: searching the past for inspiration, incessant observation and the pursuit of relevance.

The art of the papercuts has a robust history in Jewish art. With almost no exceptions, Jewish art before the 19th century predominantly consisted of ritual objects, illuminated manuscripts and synagogue decorations, very often the product of non-Jewish artists and artisans. The papercut was an art that could be practiced in the home with little more than paper and a knife and no formal training. So, it is not surprising that beautifully adorned papercut ketubot have been discovered from widespread Jewish communities and regions.

Historically, the ketubah dates as far back as two thousand years ago. Though in the recent past, it underwent a period of being disparaged and misunderstood--as a contract that bound women to their husbands--the ketubah, in its very conception, was devised as a safeguard for a wife. It delineated exactly what her husband's obligations were to herself and secured her with a contract, signed in the presence of witnesses, that ensured financial security should she divorce or be widowed. After the ceremony, the ketubah was placed in the hands of the bride or the bride’s family for safekeeping.

Today, in our far more egalitarian climate where women are no longer financially dependent on their spouses, the modern ketubah has undergone a transformation. Although the traditional ketubah in Orthodox Jewish communities is still very much the same in word and content as was, the modern ketubah has become more relevant as a written proclamation of the bride and groom’s mutual marriage vows. These vows are personal, affirming the commitment to cherish and love one and another. Many couples elaborate further, asserting their hopes and intentions to build a home together based on their faith, values and beliefs. Some couples choose to further expand upon their vows, including a road map for the kind of life they envision creating together.

Shopping with your partner for your ketubah can be a truly amazing experience. Yes, seriously. Discussions that you will have on what the two of you consider beautiful or not and which text includes the things you both consider significant and essential can lead to some incredible self-exploration, exchange of views and quite a few surprises. It can be quite the journey! So, our advice is to enjoy the process.

The ketubah signing is one of the most potent moments of the Jewish wedding ceremony. It is a tradition that is a binding Jewish marriage contract and still it is so much more. It is a testimony of the joy of the wedding day, a public statement of commitment today and tomorrow, an artwork to be cherished and to adorn one’s home and an heirloom to be treasured by generations to follow.

Danny’s ketubahs widely vary in design and style: more traditional ketubahs, less traditional ketubahs, modern ketubahs and contemporary art ketubahs. This is true, too, for the wide range of texts in Aramaic, Hebrew and English that he offers. Need a custom text? Let us know.
Danny Azoulay loves doing what he is doing and you can see that love present and manifest in all his ketubah artwork.

I just wanted to say we received our Ketubah and it is beyond stunning. We are so happy and love it. Thank you for working with us and getting it to us on time.
Sarah
Hi Leah and Danny, The ketubah arrived and it is so beautiful! Thank you so much for your help and your incredible work. We love it and we can’t wait to hang it up in our home after the wedding.
Jake and Soo
.Hi Leah Thanks for the update. We finally received the ketubah and it is absolutely stunning!!!! I just know we will get so many compliments on this unique piece of art! Thank you again, we love our ketubah!!
Lindsey
Leah, We finally opened up our ketubah package last week and it was absolutely stunning. Everyone who has seen it has just been blown away by it. Thanks for your help in the process, and please do send our sincere thanks and admiration to Danny! We can't wait to hang it in our home. Best,
Tamar
Hi Leah, I just received the ketubah and it is absolutely beautiful, it took my breath away. Thank you for your outstanding communication and customer service and to Danny for creating such a beautiful piece of artwork with such meaning! I look forward to displaying it at our wedding and hanging it in our home to look at every single day! Thank you again,
Arielle
HI Danny and Leah, We received the ketubah and it is absolutely gorgeous.  Thank you so much for such an incredible and special piece, we cannot wait to hang it in our home. You were a pleasure to work with and made everything easy. Thank you again, it is truly beautiful work.
Laura
Hi Danny and Leah, I just wanted to let you know that we are in love with the ketubah. It is even more beautiful in person, and so detailed and intricate. Several of our friends and family members have noted that it's the most beautiful ketubah they have ever seen. Thank you so much for this beautiful piece of artwork! L'shanah tovah! All our best,
Abby and Justin
Hi Danny and Leah, We arrived home last night from being away for 10 days and what a wonderful surprise was waiting for us…our Ketubah! It looks absolutely amazing! Even more beautiful than we could have imagined! Thank you SO much! My son and future daughter in law love it! Thank you for all your help and support, we feel very blessed. We will think of you and the love that has gone into making it every time we look at it. Shabbat Shalom Kindest regards.
Esther Di Veroli
Hi Danny & Leah, Just wanted to send a note that we finally removed the ketubah from the shipping container and it's beautiful! We were nervous to take it out before deciding how to store it, but we had it mounted on foam board and it's perfect. Pictures do not do it justice, it's a true work of art! Thank you for ensuring the entire process went smoothly and helping with the shipment difficulty. We're thrilled to have such a beautiful and meaningful piece of art for the rest of our lives! Happy new year!
Alex & Zach
I haven’t had a moment to sit down at a computer until now. I just wanted to write to tell you how spectacular your work is. The wedding was a smashing success and your ketubah an absolute highlight. We practically had to employ security to keep the guests away—they were so excited to get close to see all the amazing details. As brother-in-law of the חתן I was able to have some private time to admire your work. Spectacular! Thank you again. Very truly yours,
Ariel Benjamin, Esq.
The significance of a Ketubah means a lot to us. Not only is it a tradition passed down through generations, but it’s a physical and creative manifestation of our marriage. It was something we knew we would like to hang up in our future home with pride, so we contacted Danny Azoulay from Israel to create our ketubah. We love the combination of modern and traditional techniques he uses to make such a beautiful work of art.“
Jackie and Jon
Our ketubah was very special. We were trying to decide on a style of square vs round and we found a papercut one from Danny Azoulay that really spoke to us. The design was called Dancing Waves and I loved the description: “The lines of each layer converge and intersect forming a pattern united by the harmony inherent in their sequential movement. It is a true visual metaphor for the coming together of the bride and groom: each enter the union with their own qualities and together they will form a bond which enhances one another beyond the individual.”
Sara and Eric
More From Our Couples

Every year, couples from all over the world, choose to celebrate their wedding with one of Danny’s ketubahs.

We have a wide selection of texts: Conservative, Orthodox, Reform, Interfaith and a choice of Modern texts.

3 Fill in the personalization form

4 Approve the proof that we send you 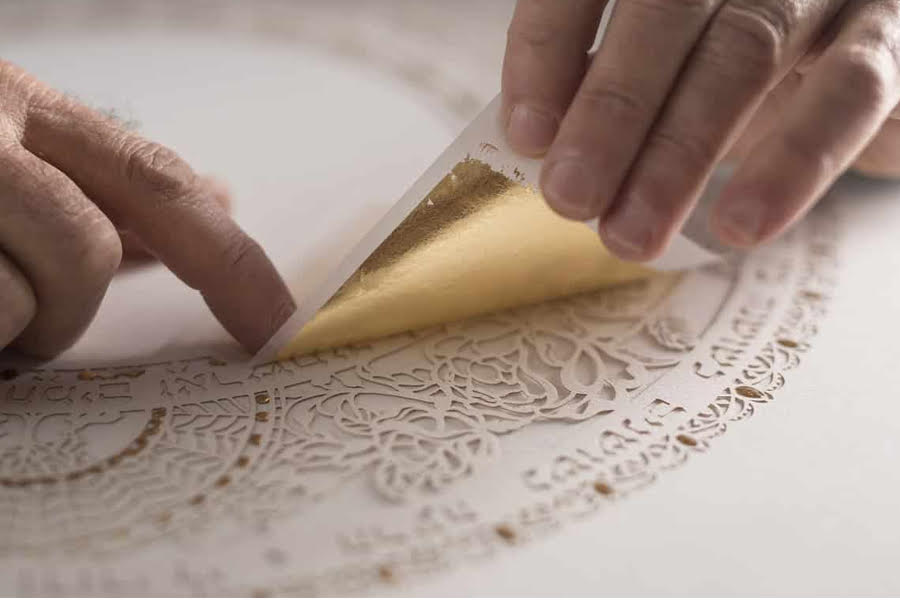 "I feel very lucky to be part of so many young people’s celebrations."

Danny’s paper cut ketubahs are the fruit of inspired study, creativity and a heightened sense of design. A synthesis of the timeless beauty of tradition and the excitement of innovation are the primary considerations in Danny’s creative process.
Read More>>
Shop All Ketubahs