home/
blog/
Traditional Ketubahs and Modern Ketubahs – What Has Changed?/

Traditional Ketubahs and Modern Ketubahs – What Has Changed? 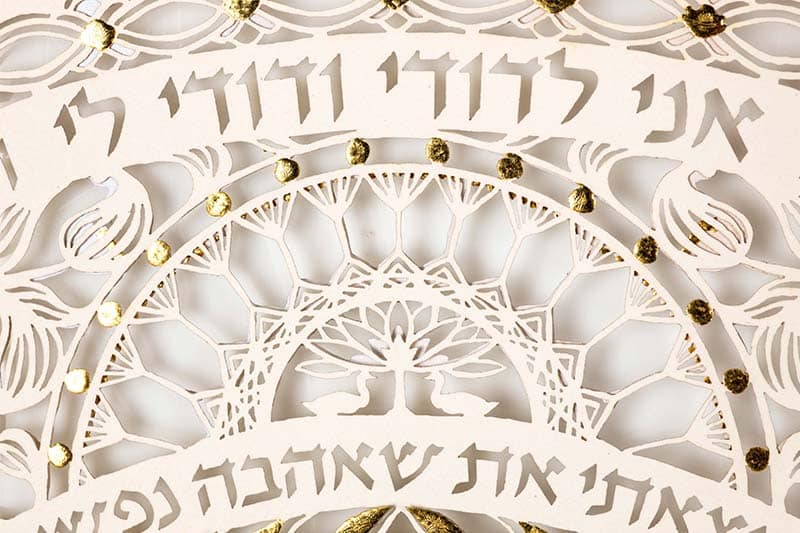 The use of a ketubah as an important part of Jewish weddings began over two millennia ago. The traditional Ketubah, created by the rabbinical court (toward the end of the 1st century CE) began as a legally binding marriage contract. This contract, written in Aramaic, attested that the bride was “acquired” by the groom, that the groom would be responsible for providing for his wife, and that his wife would be provided for in the event of a divorce. The Talmud makes it clear that the original intention of the ketubah was to make it more difficult for the husband to abandon his wife, and to leave her with financial resources if he did so. At that time, the bride’s only interaction with the document was to accept or reject the contract of marriage in front of two male witnesses.

Since its beginning as a rather dry, legalistic contract, the ketubah has developed into a beautiful work of Jewish art and in many cases a personal declaration of love and commitment between a Jewish couple. According to the Jewish precept of Hiddur Mitzvah, objects required for ritual purposes should be made to be beautiful, so it was customary for even early ketubot to be “illuminated” – decorated with beautiful artwork around the borders.

MODERN KETUBOT AND HOW THEY’RE DIFFERENT

Over the past couple of centuries, as modern-day Jewish communities pursued reform and dispensed with strict interpretations of traditional Jewish law, many traditions were abolished or faded into insignificance. Because creating a beautiful work of art as a record of one’s marriage is an appealing idea, the use of the ketubah in wedding ceremonies has continued – although a modern Ketubah is considered a spiritual covenant instead of a legal document, and many people want a fresh take on the old form. Ketubot today may be greatly modified in appearance, text, witnesses, and symbolism, as they are adapted for non-Orthodox couples. Modern Ketubot of many and varied descriptions are used in wedding ceremonies for Reform, Reconstructionist, Renewal, Interfaith, Same-Sex, and even Secular couples.

In both Orthodox and non-Orthodox Jewish weddings, ketubot are cherished mementoes of the wedding day – and they often occupy a prominent spot in the couple’s home. Because of this, many modern couples want something that does not look quite so traditional, and that has more egalitarian and individualized wording in sections of text. A modern Ketubah is much more personal than the traditional form, and is often considered a very individual work of art. Many couples will commission a professional artist and/or ketubah designer, and write their own English text or create other changes to the traditional structure. This might help ensure that they will have a unique, custom ketubah that will memorialize their wedding day and act as a visual representation of their love and commitment to one another.

THE KETUBAH TEXT AND THE DIFFERENT APPROACHES FOR IT

“Ktivah” is the Hebrew term for “writing,” and it refers to the text which appears on ketubot, meant to describe the sacred foundation of a marriage. For Orthodox and Israeli Jewish weddings, the ketubah is the original Aramaic or Hebrew text required by the couple’s level of observance, and is meant to establish a direct connection to Orthodox Judaism. Conservative ketubot will include text that still remains true to Jewish law, but may also include the Lieberman clause, which encourages the husband to grant the wife a “get” (Jewish bill of divorce) in the event that the marriage ends, supporting the right of the woman to marry again.

Even non-Orthodox couples should consult with the Rabbi that will be performing the marriage ceremony before selecting the text for their ketubah. Some Rabbis may have stricter guidelines for the exact wording of the Hebrew/Aramaic text, but those of most denominations will allow the bride and groom to select or create their own English text to be added beneath the traditional Hebrew/Aramaic words. In a modern Ketubah English text may contain the couple’s personally-written vows, may be based on the couple’s individual understanding of marriage or personal beliefs, or may act to equalize the bride’s and groom’s roles in the marriage.

Some couples may even omit the Hebrew/Aramaic ketubah entirely from their document, composing their own text in Hebrew and English. While the text of the traditional Ketubah is straight and legalistic, a modern Ketubah may have wording that emphasizes the contemporary perception of a wedding – as a romantic celebration of the couple’s commitment based on love. Just as with wedding vows in non-Jewish weddings, Jewish couples can find suggestions, advice, and examples of modern Ketubah English text to help them say exactly what they mean.

Other textual options are the Interfaith Wedding Blessing, which leaves out all mention of specific religions or traditions, or even the addition of a third text in another language to celebrate the bride’s or groom’s cultural heritage.

Traditional ketubot have signature blanks for the bride, the groom, the rabbi, and two spaces for witness signatures – and traditionally, both witnesses must be Jewish men. Depending upon a couple’s denomination and/or level of observance, they can choose any configuration of signature blanks. Some couples want to uphold the requirement of two Jewish male witnesses, but add signature blanks for additional witnesses who may be women or non-Jewish friends. Others purposely leave extra space in the margins of the document, and ask all guests at the wedding to witness and sign the ketubah, making it an even more personal memento of the joyful celebration.

Because ketubot are not mere certificates to be kept on file, but are meant to be beautifully framed and displayed prominently in the home, the ornamentation is an essential element of a modern Ketubah. Just as the text may vary from traditional forms, the “illumination” found on modern ketubot can differ considerably from traditional Judaic art as well. Couples can select a Ketubah design from “galleries” online, or may come up with their own design concepts with unique, personal details and then commission an artist to create the final illumination for them.

Judaica artwork for modern ketubot can be far more than just a tree or a watercolor depiction of Jerusalem. Although these somewhat generic images are considered “traditional,” there is no required visual symbolism to be displayed on a modern Ketubah. Today, couples can select a Ketubah design that speaks to their hearts, representing their unique tastes, personalities and shared interests. Many couples put much thought and effort into selecting the artwork for their ketubah together.

In selecting artwork for a ketubah, a bride and groom may focus on line, color combinations, or details in the illustration they choose. Considering aspects of the relationship that they most want to highlight, they may choose to include an image of a place important to them as a couple, a favorite animal or activity both share, or depictions of love and commitment. Some couples even tell the story of their relationship in their Ketubah design, adding tiny details such as the face of a beloved pet, a score from a favorite piece of music, and/or symbols for important events in their shared lives. In this way, they make the artwork on their ketubah entirely their own, so that it becomes a rich and eloquent expression of their love and their future together.

Illustrations for modern ketubot may include modern images of symbolic of life and love, and may be uniquely designed for any couple and type of wedding ceremony. When shopping for a designed Ketubah NYC residents for example are fortunate to have a wealth of ketubah artists to choose from – for both traditional and modern ketubot. Modern Ketubah illustrations may be created in a wide range of media, such as custom-designed paintings, abstract photography, digital art, or even beautifully detailed paper cut Ketubah designs.

A KETUBAH TO COMMEMORATE YOUR COMMITMENT

A custom-designed, beautifully-illuminated ketubah depicts a couple’s feelings of love, respect, and devotion to each other, and can describe the home, family, and future life you envision. Whether proudly displayed in your home, or taken out to be admired and read aloud each year on the anniversary of your wedding, your ketubah will be a lasting testament of your love and commitment.