Ketubah of the month - Jerusalem Gate 20% off
home/
blog/
What is a ketubah? A few things worth knowing/

What is a ketubah? A few things worth knowing 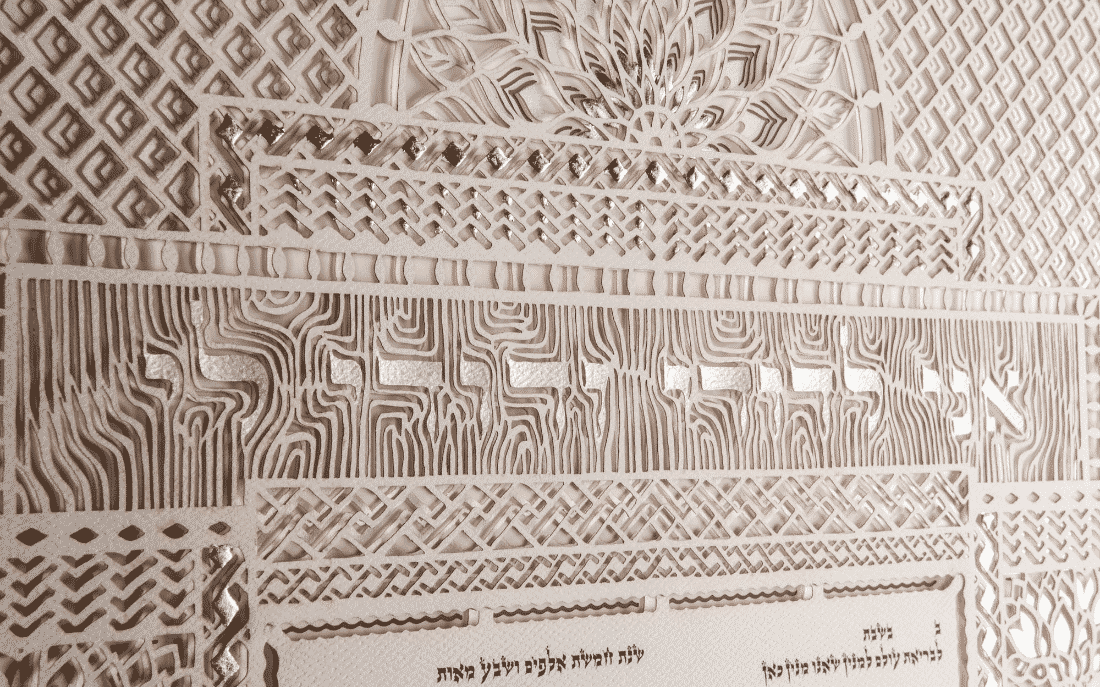 A ketubah is a Jewish marriage contract that is legal and binding. The word, ketubah, literally means “what is written”.  The very earliest existing examples date back to the 4th century BC and were found in Cairo, Egypt.

Historically, the ketubah was a legal wedding agreement that specified the obligations of the groom to his bride. This included providing not only a home, food and clothing for his wife, but a commitment to provide her emotional and sexual needs, as well.  A specific sum of funds and/or property (mohar), determined by the two families were written in the “Tenaiim” (“conditions”). This was the settlement to be paid to the wife should the union be dissolved in divorce, or alternatively, in the unfortunate event of the death of her husband. The sages considered this an all-important safeguard for married women and were vigilant that “a woman should not spend even one night in her husband’s house without a ketubah”.

Interestingly enough, although there has never been one standard text, ketubahs were quite similar in wording and form, despite the fact that the Jews were widely spread out and geographically separated in diverse lands.  Furthermore, through the centuries, it pretty much has maintained its original language and legal status and remains as such in the Orthodox community even today.

Art ketubahs were first made popular by the Sephardim. Painted and illuminated examples have been found from as early as the Middle Ages. What makes this legal document so incredibly unique is the fact that it has been lavished with careful artistry, symbolic motifs and ornamental details. The beautification of this legal paper leads to a deep understanding of just how much Judaism honors and confers sanctity to the covenant of marriage: elevating its status to the most auspicious of all life cycle events.

From a historical perspective, these early ketubahs are a goldmine of information that enables us to comprehend the times and the lives of our ancestors. There are themes from the Torah, as well as local influences, on artistic style and design choices. By looking at them, one can flesh out the bride and groom and their respective families, the community in which they existed and the inter-cultural borrowings of the region in which they lived.

Today, contemporary ketubahs have evolved into not only a wedding contract. Amongst the Reform, Conservative, Reconstructionist and Secular Humanistic branches of Judaism and in an interfaith marriage, it is a proclamation of the hopes and aspirations of trusting partners committed to their separate and mutual dreams. It is a heartfelt and honest promise of two loving individuals coalescing their fates; consenting to experience the joys and sorrows that life may yet bring them, side by side.

With the fruition of feminism, women, no longer financially dependent, are equal partners. Therefore, the ketubah has transformed from a prenup to, on one hand, a romantic declaration (yes! Love), and on the other hand, a road map to guide and sustain the beloved partners’ vision of the life that they shall build together.

When choosing a text for a ketubah, it is of utmost importance to be in direct contact with the ordinant who is performing the ceremony.  Since it is a lawful agreement, the day, month, year and location: city and country will be included. But there might also be particular requirements for certain texts or clauses, or for the spelling of words and names.

Language is another aspect that needs to be considered and, again, this is mainly a matter of what kind of ceremony is performed. The traditional ketubahs are still written today in Aramaic (as they were in the Talmudic period), while Hebrew and/or English, French, Italian and Spanish are frequently utilized.  Additions may be a translation into English or an addendum to the Aramaic/Hebrew. And of course– in keeping with the rabbi’s requests).

Though, the signing most often takes place at the wedding, immediately preceding the chuppah: it needn’t be so. It can actually take place even weeks beforehand.

Traditionally, the ketubah is signed only by two witnesses (male Sabbath keepers who are not blood relations of the groom).  Today, modern couples will both sign the ketubah along with the officiant and witnesses of the couple’s choosing. This usually takes place in a more private and quiet location in the venue.

Later, under the chuppah, the rabbi may choose to read the Ketubah aloud- in front of family and friends. It is a moving moment that embraces the rich and prolific past of the Jewish people while celebrating its continuation for future generations.

Previous THE KETUBAH SIGNING: THE MOMENT HAS FINALLY ARRIVED
Next Ketubah Design: How to Choose?