home/
blog/
Jewish Ketubot – How to enjoy them long past your wedding day?/

Jewish Ketubot – How to enjoy them long past your wedding day? 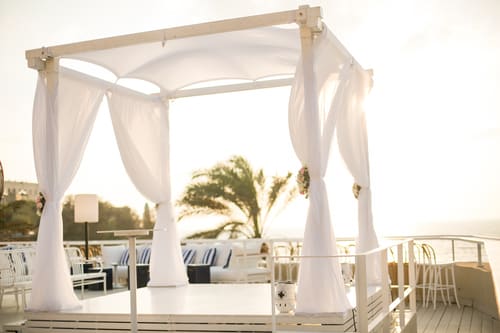 Looking for a way to bring the joy of your Jewish wedding well beyond the Big Day?

More and more modern Jewish couples are seeking out Ketubot, Jewish marriage contracts, to sign before the ceremonies under Chuppah.

Up until more recently, the text of Ketubot have largely gone unchanged. They feature the legal format of a basic contract—the date, the location, and signatures of the groom and witnesses— along with the actual list of a husband’s basic obligations towards his wife.

Today, many couples planning their Jewish weddings also wish to feature the bride’s signature, and personalized texts that focus on the mutual emotional commitment that husbands and wives wish to take upon themselves. Ketubot are also featured in many different languages, aside from the classical Aramaic.

Let’s say you’re ready to join the millions of couples today who wish to feature Ketubot at their Jewish weddings? What do you do with a Ketubah after it’s been signed?

More traditional couples of Ashkenazi descent have a custom to keep their Ketubot somewhere private and safe. However, it’s become more popular to hang Ketubot up in a prominent place in the home, such as the living or dining room.

Heads up, though: even the traditional Jewish couples who do hang up their Ketubot generally avoid featuring them in the bedroom, in keeping with the customs of modesty around religious scripture. On the other hand, the bedroom is seen as a romantic place to feature a Ketubah. We encourage you to do some light research and make an educated decision for yourselves.

A great benefit to finding a beautiful Ketubah that you both love, with a text you both appreciate, is that it’s a family heirloom in the making.

Fine artist Danny Azoulay, based in Israel, creates stunning Ketubot in a variety of text and design options that you can enjoy for many years to come. Using quality materials, and the timeless papercut method, Azoulay has something for every Jewish couple out there.

So make the Ketubah part of your Jewish wedding, keep the magic of your Big Day alive throughout your lives together with this beautiful piece of Jewish tradition. And thanks to artists like Danny Azoulay, keeping Jewish marriage customs with Ketubot has never looked this good.

Previous what is the actual meaning behind the breaking of the Jewish wedding glass?
Next Want to start learning more about Ketubot, and why you should sign a Ketubah at your wedding?