The henna plant, Lawsonia inermus, is a tall shrub that grows in the hot, semi-arid climates of North Africa, Asia, and Australia. It has been used for cosmetic, mystical and medicinal purposes for centuries- as early as the Bronze Age- and to the present day. Mentioned in the Bible in Song of Songs 1:14 “My beloved is unto me as a cluster of henna in the vineyards of En-Gedi,” henna has been prominent in diverse religions and countries as an important ritual of pre-wedding and wedding customs.

The Mizrachi Jews of Morocco, Algeria, Yemen, Persia, Iraq as well as other countries, absorbed and adapted the use of henna as did their Muslim, Sikh, Hindu and Zoroastrian neighbors. The Jewish henna became an important tradition that marked and enhanced auspicious events: births, birthdays, bar mitzvahs, holidays, and most lastingly as a rite of passage ceremony for Jewish Sephardic weddings. 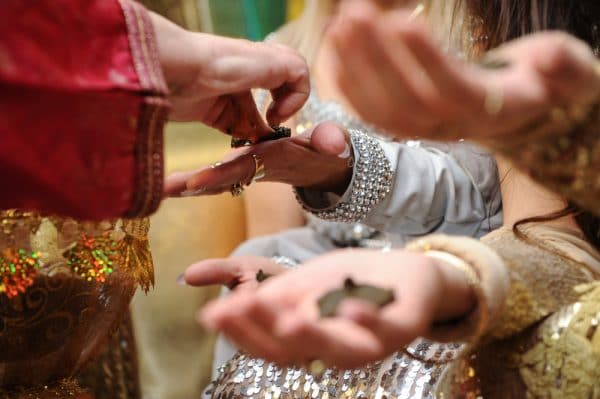 Of all the Jewish Sephardic wedding traditions the unanimous crowd favorite is the Jewish henna wedding ceremony.  It is colorful, spirited, and highlights the bride and the groom’s reverence to their heritage and their anticipation for a happy future. The regional variations of the Jewish wedding henna or Hina are manifest in the clothing that the bride and groom wear, the specially prepared foods and pastries, and the music and dancing.

After the mass migrations of the Jews from North Africa and the Middle East in the mid-20th century, many traditions seemed to have been fallen to the wayside and forgotten in the years that followed. This was due to the great financial and social hardships that the Mizrachi Jews endured and the desire of the new generation to acclimate and modernize in accordance with their new homelands.

But, in the past few decades, there has been a tremendous resurgence of cultural pride and resurrection of the old regional customs and ceremonies–especially the henna Jewish wedding party. Today, having a modern Jewish wedding does not discount the inclusion of centuries-old Jewish rituals and ceremonies.

When talking about a Jewish henna/ hina, it is a vision of the Moroccan Jewish henna party that immediately comes to mind:  brightly colored garments, Fez hats, tables of marzipan candies, dates and special pastries, authentic Moroccan music blasting while family and friends dance with infectious enthusiasm. And, of course, a fair amount of “lululululu”. 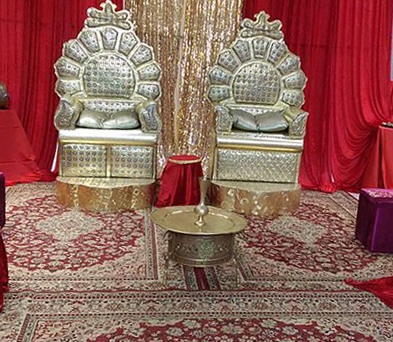 The bride and groom dress in lavish kaftans and jellabiyas, according to Moroccan wedding traditions, and very often have several costume changes through the evening. They are the king and queen for the day and are often carried into the hall on elaborately decorated ottomans and seated on thronelike chairs. Guests are encouraged to change into the brightly-colored traditional clothes provided by the host.  Gifts (usually gold jewelry) are given to the bride and groom by the families.

Finally, the mud-like henna paste is generously applied by the bride’s mother or grandmother:  in a circular shape, on the palms of the bride and groom.  Afterward, the palms of the hands of all the guests will be hennaed one by one- and they, too, will be blessed with good luck.  Henna is said to protect the couple from the evil eye and to bless them with luck, health, and fertility.  In Morocco, the Jewish henna party would have taken place on the days preceding the wedding and may have gone on for several days.  But, today, in Israel, the henna party will take place a week or even two, beforehand. There are those who incorporate the ceremony into the wedding, itself.

The Iraqi Jews, mostly centered in the city of Baghdad, also celebrated the henna Jewish wedding traditions. In fact, the Jewish henna wedding ceremony might have been the larger and more festive affair; while the wedding ceremony, taking place a day later in the synagogue, officiated by the rabbi, was a quieter occasion attended by family and close friends.

The Iraqi henna party featured its own distinct dress, cuisine, music, and dance. Originally, both the bride and groom would have had their hands and the soles of their feet hennaed, but later with the influence of the European presence in Iraq, a more discreet hennaing of one finger of the groom and all the fingertips of the bride subsequently wrapped in silver paper was the norm. With the Aliyah of most of the Jews in the 1950s to Israel, the Jewish henna ceremony was left behind. 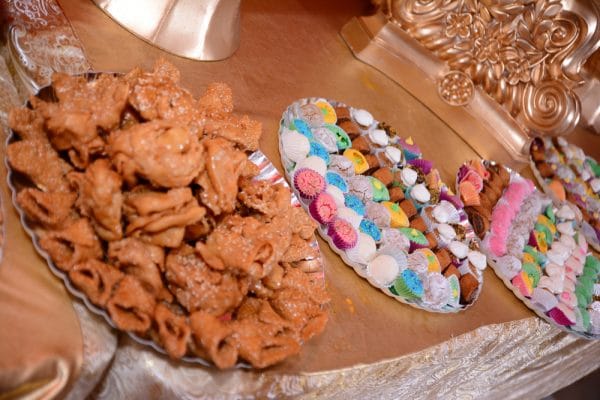 Today, the Jewish henna ceremony is growing in popularity – not only for Sephardic and Mizrachi Jews but Ashkenazi Jews as well. There are many companies, now, that specialize in henna events planning: providing furnishings, music, and ethnic clothing and delicacies.

The Jewish henna party is a time for celebration, a chance to wish the couple good luck and blessings, an opportunity for the bride and groom’s families to come together in jubilant circumstances, and an evening to honor Jewish rituals and ceremonies of the past imbuing them with a modern interpretation.