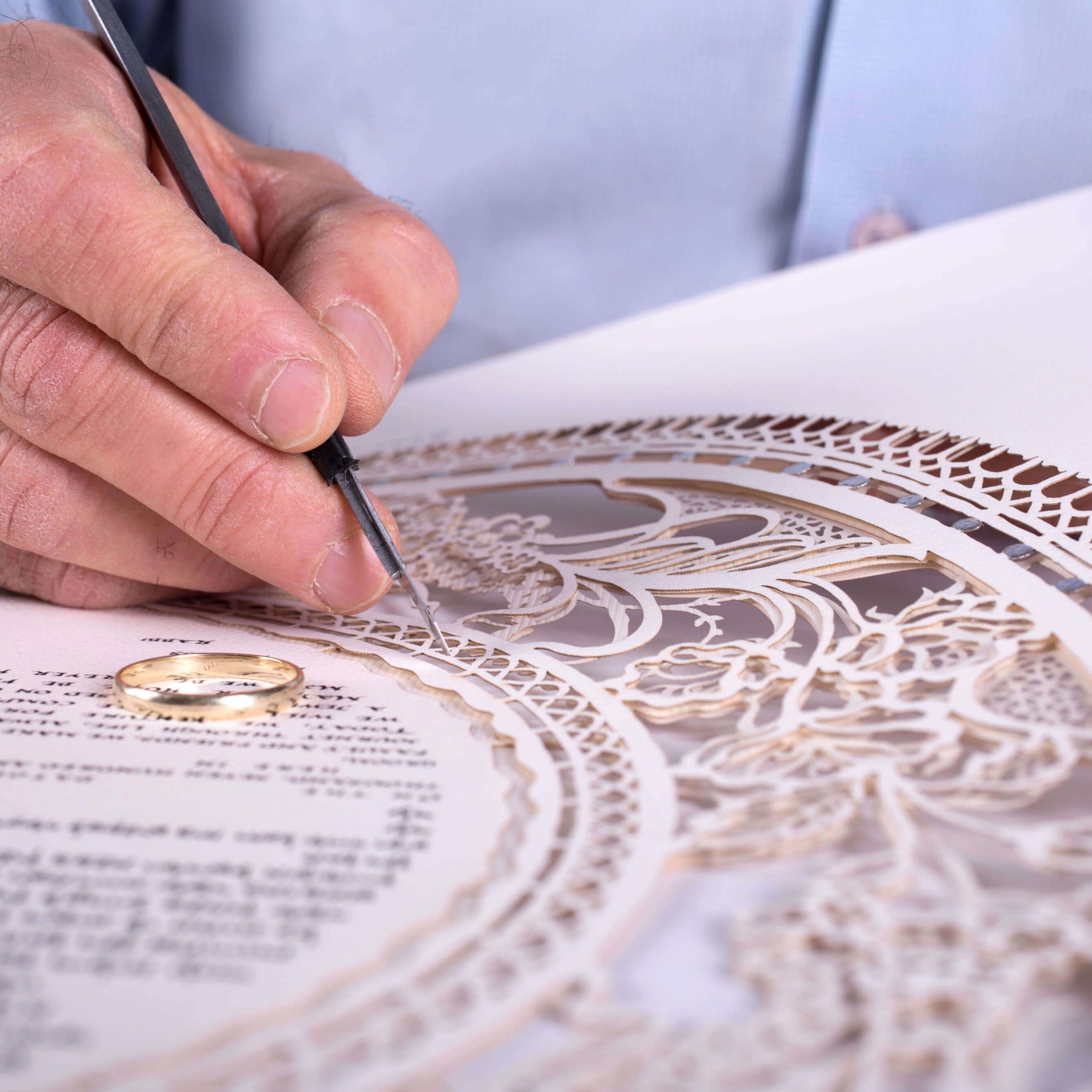 Throughout its history, Judaism has inspired a wide array of Jewish religious art – whether be it handicrafts or fine arts. This is true, despite the fact that the creation of “graven images” were prohibited going back to Biblical times. Jewish law, however, holds no restraints on creativity associated with the concept of Hiddur Mitzvah“ or imbuing a ritual with beauty. Thus a rich tradition in ceremonial Jewish religious art grew over time. Indeed, adorning and beautifying synagogues and ritual objects dates back to ancient times.

The intricate traditions of Jewish religious art, including illuminated ketubot, can be traced from the Middle Ages. While the exact date when the ketubah became an integral component of the Jewish wedding ceremony cannot be pinpointed; its Rabbinic implementation goes back to the times of the Talmud (70 – 500 BCE). Though, the Ketubah text remained, essentially the same in content, the adornment of a ketubah evolved in various Jewish communities. The addition of decorative artistic details to the ketubah arose in Italy. The first known ketubah displaying Jewish religious art came out of Ancona where a rich tradition in this Jewish religious art form was well established.

Jewish religious art differed among the varying Jewish communities; artists often incorporated styles that were characteristic of their location and reflected the artistic traditions of their adopted countries. Consequently, the Jewish religious art that adorns the ketubah beautified that, which is basically a legal marriage contract, and now, years later, provides a window into the world in which these Jewish communities flourished.  Ketubot, found in Muslim countries, mirror the religious and cultural norms of the area. For example, the human form does not appear; rather, themes are extracted from the animal and plant worlds. Consider Italy, where historical ketubahs dating from the Renaissance are most often brightly colored and accented in gold leaf.  They also included a wider margin surrounding the text in order to integrate Biblical scenes, as was the style format at the time. Interestingly, the Jewish communities of Eastern and Central Europe did not decorate their ketubahs. Rather, because the ketubah was simply a marriage contract and viewed as an ordinary legal document, they were carefully written but contained no Jewish religious art.

Jewish religious art or not, it’s important to note that an Orthodox Jewish wedding ceremony cannot proceed until the ketubah is signed. Once signed it becomes the property of the wife and is to be kept somewhere accessible to her. Nowadays, though, it’s often displayed prominently in the home to be showcased as a beautiful piece of Jewish religious art.

The ketubah can be the most meaningful piece of Jewish religious art you own. Choosing an accomplished and skilled artist to create your ketubah is the best way to ensure that your ketubah will be treasured by your children and your children’s children. Take a look at what Danny Azoulay has to offer, I promise you will not be disappointed.

Previous What is an Orthodox Jewish Wedding?
Next Jewish wedding symbols